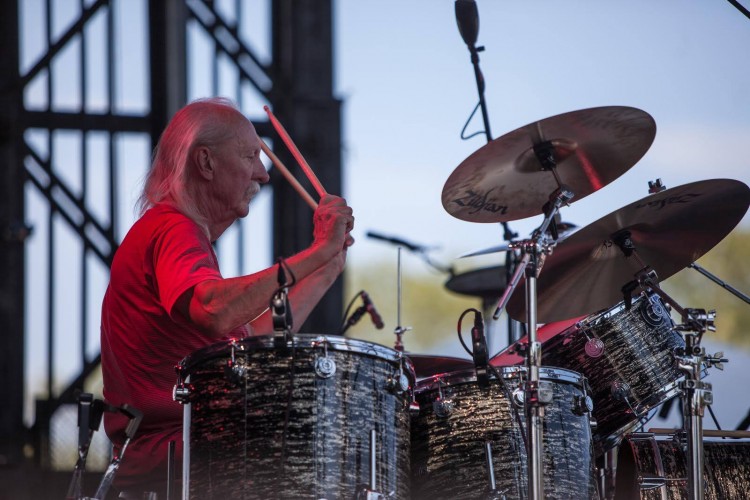 Butch lives on in our hearts and in the music he changed forever.  We love you, Butch.

BUTCH TRUCKS is an American drummer who is one of the founding members of The Allman Brothers Band. One of Trucks’ first bands was local Jacksonville band The Vikings, who made one 7-inch record in 1964.  Another early band was The 31st of February which formed and broke up in 1968. This group’s lineup eventually included both Duane Allman and Gregg Allman. They recorded a cover of “Morning Dew”, by 1960 folk singer Bonnie Dobson.

Together, the two drummers developed a rhythmic drive that would prove crucial to the band. Trucks laid down a powerful conventional beat while the jazz-influenced Johanson added a second laminate of percussion and ad libitum cymbal flourishes, seamlessly melded into one syncopated sound.

Said founding member and co-lead guitarist Dickey Betts of Trucks’ addition to the original band lineup, ” …When Butch came along, he had that freight train, meat-and-potatoes kind of thing that set Jaimoe up perfectly. He had the power thing we needed.”

A little anecdote from Butch tells the tale of a drummer’s life. “We were playing North Lake Amphitheatre near Atlanta several years ago. Two offensive linemen that played with the Atlanta Falcons were at the show. They were obviously football players, or if they weren’t, they should have been. I introduced myself, and they told me their names. I said. “Yeah, I’m quite familiar with you. We’ve got a lot in common. “And they looked down at my little shrimp butt and they said, “Well, what do you mean by that?” And I said, “Well, we do all the work and the quarterbacks get all the credit.” They laughed their butts off.” Trucks keeps his sense of humor about his life in the back of the stage, but seems quite serious when he says, “It’s a band, and what we have in this group is a band. And all the elements are necessary.”

Butch continues to be a leading component in the Roots Rock Revival summer music camp. Roots Rock Revival is a four night, five day all-inclusive intensive that features master classes, jam sessions, Q&A sessions, open rehearsals and more. Its an intimate look at the Southern Blues Rock movement, the Allman Brothers Band and the music that forms the foundation of Rock ‘n Roll. Some of the young attendees are often invited to perform with Butch at local gigs.

For more info on Butch: http://www.butchtrucksandthefreighftrainband.com

For more info on the Allman Brothers Band:  http://www.allmanbrothersband.com