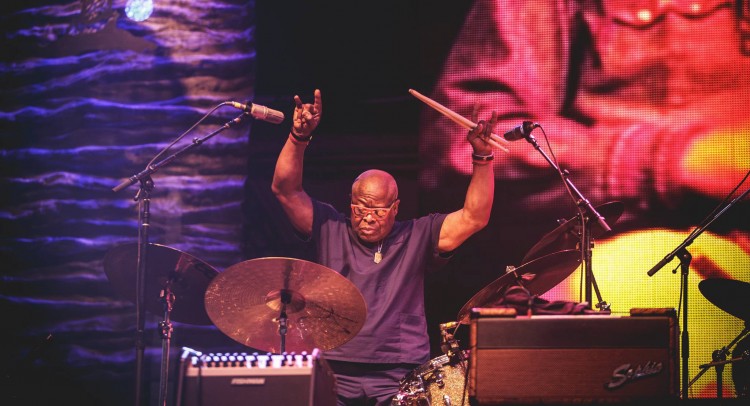 Biography from Jaimoe.com
Legendary drummer and founding member of the Allman Brothers Band, Jaimoe and his Jasssz Band play American music. They combine elements of Jazz, Blues, Rock-n-Roll, and R&B into a unique blend that captures the spirit and stirs the soul. Their repertoire ranges from new interpretations of classic tunes, as well as original songs that are classics in the making. Jaimoe’s Jasssz Band features Jaimoe – drums, Junior Mack – guitar and vocals, Dave Stoltz – bass, Bruce Katz – keyboards, and some of the finest horn players of our time, including Paul Lieberman – sax, flute, and piccalo, Kris Jensen – sax and  Reggie Pittman – trumpet.

Jaimoe, man of many names, and one of the original six Allman Brothers Band members, has combined forces with fellow drummer and percussionist Butch Trucks in a million subtle, driving, playful, and energizing ways to keep the music on track and flowing.

Jaimoe himself contributes the following biographical insights: This is Jaimoe. No, I did not play at Monterey. I played with Otis Redding 4/18/66 through 9/5/66 in the band that did “Otis – Live at the Whiskey A-Go-Go”. I joined that band a week after that record was recorded. A very good friend of mine, a very good sax player and a hell of an organizer, Donald “Cadillac” Henry, was a great reason for me getting that break and a lot of others, right up to the fact of the reason I was in Macon was because Donald told me to go to Macon. Phil Walden was putting a recording studio in Macon which was Capricorn Records. Phil Walden and Otis Redding had a company called Redwal Music.

On 4/18/66 Otis had about a 9-piece band. I joined that band in Dallas, TX. In less than two weeks it was 13 pieces. Edward “Woody” Woodson was the other drummer in that band. Woody was the drummer on “Live at the Whiskey”. I really learned about playing live rhythm & blues and rock & roll from Woody Woodson & Butch Trucks. Woody could take a bass drum, snare, floor tom, hi-hat, and crash & ride cymbal and swing your ass from Washington, D.C. to L.A. In three weeks we were in the Apollo Theatre in New York. Now we’ve got 18 pieces. I played in my first big band. I backed Percy Sledge, Patti Labelle & the Blue Bells, the 5 Stairsteps, Brenda & the Tabulations, and the Manhattans. The Howard Theatre in D.C. was another 18-piece band. Added to that show was Smokey Robinson & the Miracles & band, also Martha & the Vandellas, and the Kin Folks, a bad ass 4-piece band out of L.A. The next stop was the Regal Theatre in Chicago. By now we had 22-pieces and the co-star was the Queen of Soul. That’s right. The Lady Aretha. She had her own rhythm section. I was glad I didn’t have to play behind her. She raised hell about one thing or another the entire week. I played again with the Stairsteps, Patti Labelle, and 5 guys called the Step Brothers. They were tap dancing acrobats about in their 50s and 60s. They were one of the top tap dance acts of all times. They offered me a gig in Vegas, but I had to turn them down. I was having too much fun and learning a lot playing behind all of those people in those big bands and orchestras.

Otis Was a Great Teacher

I also had a great offer from Curtis Mayfield & the Impressions. They said my playing reminded them of Leo Morris, a New Orleans drummer who we know today as Idris Muhammed. I can thank Charles “Honeyboy” Otis for that one for Honeyboy was a great influence on Idris, “Smokey” Johnson, Zigaboo, John Boudreau, Jr., and a lot more than he’s given credit for. Honeyboy is the reason that I can play as many styles as I can. Also listening to all that stuff Earl Palmer did on those records, Honeyboy turned me on to Earl Palmer.

Just for the record, that photo I am on with Otis is 1966 in Columbus, GA at the Columbus Auditorium, where you cross the river into the Central Time zone and into Phoenix, Alabama. I did a 42-date tour with Otis — 41 days back-to-back with a day off. We did a TV show, “The Big Beat”, hosted by a disc jockey from the famous WLAC in Nashville who on the day of taping of the show got drunk couldn’t go on. So Otis not only starred the show, but mced and hosted the show. I played behind James Carr, Mitty Collier, the Ovations, Garnette Mims, Patti Labelle & the Bluebells, Percy Sledge, Sam & Dave & band co-stars. Woody played behind Otis. That night I played 3 hours at the Parrot Jazz Club with whoever got on the stage. The next night we did the 42nd, show. Great tour. I learned a lot from Otis. I didn’t realize it at the time.